Our work on Local Government Finance is split into two areas, the Fairer Funding  campaign and a financial analysis of local authority budgets.

Did you know that:

The Rural Fair Share Group is a grouping of parliamentarians who have come together to argue for fairer funding for services across rural England. The Secretary of the Group is Graham Stuart MP.

Click here to see the Governments Pledge on Rural Services

Below is an analysis provided to local authorities and rural MPs in January 2014 which illustrates the current rural to urban divide in the financial settlement 2014:

We provide a range of analysis for local authorities, considering their individual RA position (revenue estimate) and RO position (Revenue Outturn) compared with other authorities and groups of authorities:

At the State Opening of Parliament on Tuesday 11 May, the Government, through the Queen’s Speech, set out its priorities and programme for the coming session including the legislation it intends to pass. The Queen’s Speech states the programme it...

The Treasury published its “Tax policies and consultations report (Spring 2021)” on 23 March 2021 “Tax day” combines an overview of the Government’s taxation policy with an update on the 30 tax-related consultations that are underway.  No major...

The Rural Services Network (RSN) is pleased that the Final Settlement for Local Government, announced last week in Parliament with a written statement from the Minister, includes the additional £4 Million pounds for the Rural Services Delivery Grant set out...

RSN urge rural authorities to respond to the consultation

The Government announced the Provisional Local Government Finance Settlement on 17th December 2020 This sets out the funding that Local Authorities will receive for the period 2021-2022.  The Rural Services Network is concerned that once again,...

Last week the Government announced a one-year Spending Review for 2020, the long- term spending review being abandoned in favour of a short term approach to prioritise the response to Covid-19 and a focus on supporting jobs. There are some... 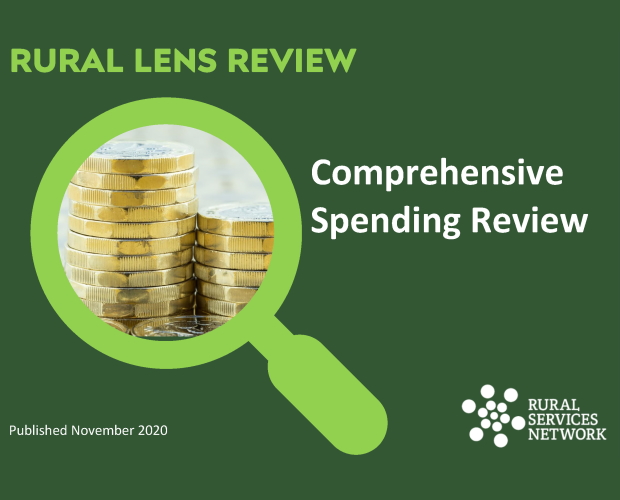 The Government has announced a one-year Spending Review for 2020, the long- term spending review being abandoned in favour of a short term approach to prioritise the response to Covid-19 and a focus on supporting jobs. The Rural Services...

The hotly anticipated Comprehensive Spending Review was announced today, and given the unprecedented times in which we live, it was always going to be critical to see how the Government would support the shrinking economy and ensure the sustained delivery...

The BBC report that a recent survey undertaken by the County Councils Network (CCN) shows several local authorities could be forced into ‘damaging’ cuts to services next year to remain solvent. Only one in five of England's county councils and...

The RSN demands fairer funding from Central Government who have historically and systematically underfunded rural areas.

The RSN is challenging often overlooked rural threats such as chronic underfunding, changes in population and diminishing resources.

The RSN wants to ensure rural communities have the same access to health care as is currently received in urban areas.

Rural residents can suffer from Rural Vulnerability, due to a combination of issues such as poor transport, lack of broadband low wages and higher than average house prices.

The affordability of rural housing to people from a range of ages and backgrounds is key concern for RSN.